As promised, here are some pics of the Khorne Raptor squad in all it's winged glory.

Okay, the first two up are the Icon, which you've seen previously, and my normal Khorne Berserker. The normal 'Zerker is one of two in the group. He's flying over the ground, almost gliding, scanning around for an opponent to attack. 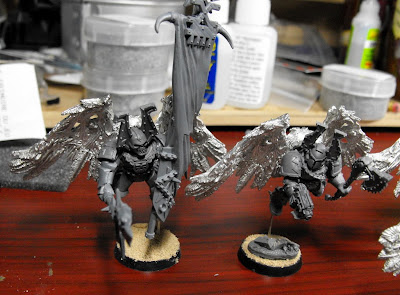 The next up are two special guys. The guy on the left is my Champion. I know, he looks small when compared to everything else, but I actually really like the pose. He's weilding my version of lightning claws. But it's all about the pose. Arms wide and on the groun ready to attack. His torso is posed leaning slightly back, as is his head, in a fearsome howling rage. The wings were also chosen because they are the wider, open wings. While me Icon is posed to look tall and moving forward, the Champion is meant to be wide and imposing.

To his right is my special weapons guy. He'll either be a melta or a flamer, depending on whichever I want to run. The possessed arm with the flame shooting out makes it work well for both, I gather. Instead of red flame I'm considering using green flames for contrast. He's on the ground as well clearly looking at what he's burning down in front of him. His close combat weapon is held at the ready.

Now we come to the next two. My second normal Berserker, and one with two cloes combat weapons. The normal 'Zerker is landing, opening fire and preparing to swing his chain sword down on the foe. The wings are pushed out as he lands, giving him a bit more shooting time and also time to consider which head to remove from which foe. Choices like that shouldn't be rushed.

The raptor on the right is using a piece from the Chaos Warriors set for his right arm. I imagine he's jumping toward his right, the reason his feat and head are turned that way. His sword is bring brought up to block an attack, and his left "hand", another possessed arm, is pulling back readying for a swift piercing attack. 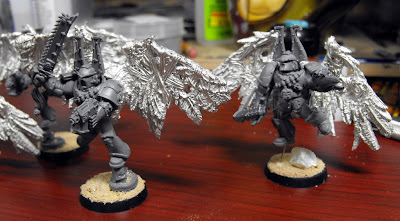 The final two raptor squad members are dual wielding close combat weapons and pistols.  The gentleman on the left is using two arms from chaos warriors.  I didn't use shoulderpads because I felt in this case, he wouldn't want to wear them and hinder his arms.  I can easily see this guy impaling a foe with his sword and at the same time flinging his axe over at another guy.  Brutal!  Combine the ripped arms with the chest I used and the skull helmet, it almost reminds me of a Khorne version of Skeletor.

Of course, what would Khorne be without some guy going all akimbo style with two pistols.  I love this pose on my 'Zerkers, and I've used it before.  He may not be raging like the other guys, but I see him using his two pistols like weapons themselves, blocking attacks and slamming the muzzle under an Imperial fool's chin and pulling the trigger. 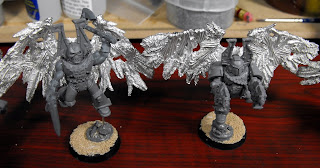 I think this is an awesome looking squad. I especially love the Icon Bearer, the use of the fantasy bits really works and the pose is great. The wholes squad looks brilliant, looking forward to seeing them with some paint on! :)