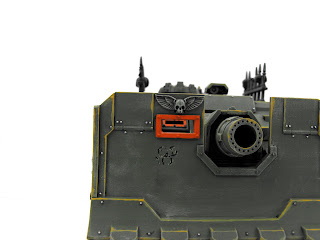 For my Bilecannon (Vindicator), I thought I should try something I haven't really done before. Freehanding some nurgle symbols onto the vehicle. I was actually quite pleased with the result. Of course, I still have to weather the vehicle, but I wanted to get the symbols on so it at least appeared as if they were painted on originally. 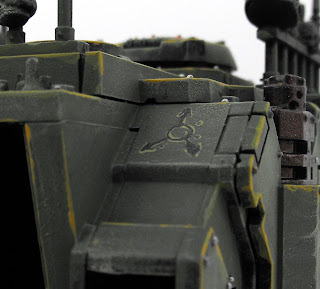 This lead me to thinking about modeling and painting in general, and how I should approach each new vehicle, each new unit. I should always be thinking about trying something new. This time it was freehanding. Last time it was magnetizing the entire vehicle. Next time it might be a bit more conversion with green stuff. 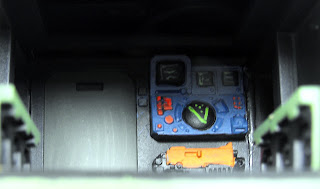 Whatever it is, I think the point is clear: I can't just rely on using the same old techniques I've been using. I should always be trying to expand what I know. Of course, that doesn't mean I should just changing things around for each vehicle. My next vindicator will follow the same look and feel. I might experiment a bit more with the freehands, but I want the vehicles to look like they belong in the same army. 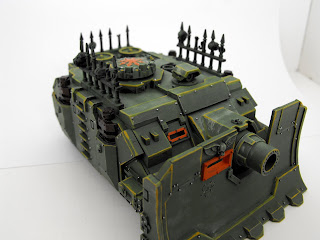 This lead to me thinking about the army as a whole (which I still need a good name for). While I play Chaos Space Marines, I can also focus on building an army as a whole that I want to build. This means I've been considering using the Space Marine codex, or another chapter, and twisting the rules and units around to a CSM theme.

Which brings me to this final thought: a nurgle force needs snipers. Noise marines would make great snipers, but I don't like the models "nurglized." Also, the Sonic Blasters can get expensive, and you have to order them in from GW. I've been considering buying a Space Marine scout squad with sniper rifles and using them as my long range "noise marines." Should be fun!
Posted by Jason at 9:44 PM

Well Mr. Dice, although you "may not have a lot of readers", I'll read yours if you read mine X-D

That vindicator is pretty nice, I think you're the first I've seen who painted the inside of a non-transport vehicle. I like the outlining, and the new freehand work is pretty good!
-Plastic Shavings

Thanks Chris. I love checking out new blogs. The one thing I enjoy is reading through other people's thoughts on various aspects of the hobby. So many great ideas. Besides, the more I have to read, the less chance their is nothing to read when I want it. =)

As for detailing the insides, I've resigned myself to the fact that it's there to paint and enjoy, and I enjoy painting it. Besides, I'll know if it's not painted! Unfortunately, I've already glued up several other tanks, like my Vindy, before painting up the insides. Painting up the inside is not easy if it's already built.

Anyways, thanks for the comments. =)