Iced Tau of the Nest'La Sept 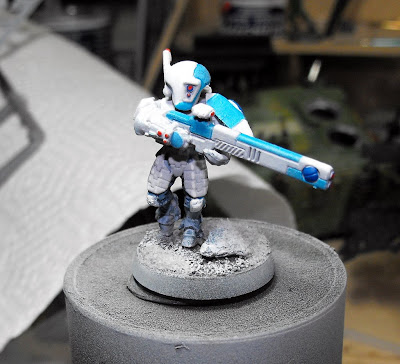 I didn't like the Tau I had. See, I have a Nurgle armor all green and Nurgley, and I was planning on doing the Tau as a woodsy-forest Tau. That meant green as well. My wife didn't want more green. Vomit Brown was going to be the happy medium, but even then, I was still going to include green, which still would defeat the purpose because I wanted something bright.

So, I mentioned white... and green. She said I was dumb and pretty much asked me why I didn't do white and blue. And this is the outcome. A quick mock up of a winter-based Tau army. So, it will be a white base with Icy Blue for the highlight and a Asurmen Blue wash on the legs. Enchanted Blue is the darker blue. Luckily, all my basing is easily "snowified." I plan on picking up some blue and clear crystals tomorrow from the craft store to include on the bases to add something interesting. Blazing Orange is the contrasting highlight. 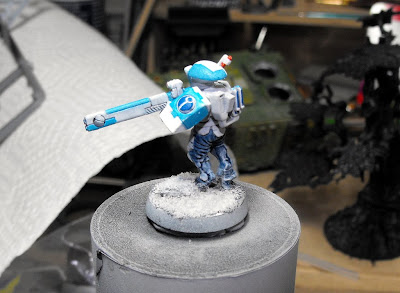 Below you can see the other Tau color schemes I was working with. Between the shoulder pads and the helmets, things were going horribly wrong. I have to say, I'm much happier with the Iced Tau, from the Nest'la sept. Get it? Get it? Nest'la Iced Tau.

Okay, yeah, I know. It was wrong. So very, very wrong. But as my D&D character, Wrenn Pickleton, Wild Sorcerer would say, "It's Wrenntastic!"
Posted by Jason at 12:00 AM

I love the light blue (I'm undecided about the dark blue below.. perhaps a grey)? Overall, the effect is great.

Soon we'll have to see how easily they die... hehehe

Grey would work. Granted, the dark blue on the gun is gonna change to an orange, but yeah, I can see grey working there. It still fits with the iced theme.

On a side note: I fully expect to have the Tau die horrible deaths, over and over again. Unfortunately, they are considered one of the weaker armies in 5th. However, their play style is unique, and I love the story and the models, and damnit, that is what is really important.

You should listen to your wife more often.. She seem's like she is very smart. :)